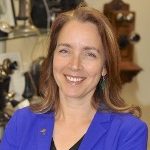 Christine O'Connor is the executive director of Alaska Telecom Association, a consortium of all but two of the telecom companies based in Alaska, whose connection to education is a result of being the Broadband providers throughout the state of Alaska. Christine also previously served on the board of directors for Nushagak Cooperative which was the local telephone and electric co-op.

A life-long Alaskan, Christine moved around the state frequently due to her father’s job as a State Trooper. She attended grade and middle school in Moose Pass before attending high school in Dillingham, which is where she and her husband raised their own family. As a former town librarian, Christine spent seven years working with the local youth, offering homework help among other library duties, and calls it “one of the best jobs I ever had”.

On being asked what one big dream she has for education, Christine explains: “given my rural background in Alaska, I want all the kids in Alaska, especially rural Alaska to have the range of opportunities for what they can learn. I want them to have the basics. A teacher that is teaching them, math, English, writing, all the things they need, but also just because they're in a distant place, whether they're Dillingham or New Stuyahok or somewhere they're interested in a foreign language, I want them to be able to learn that... with the technology we have and the infrastructure that is being deployed (or will be) deployed in the near future, there is no reason we can't offer all the kids all of that opportunity.”